When we decided to take our grandsons Jace and Jayden on a trip to experience history, I wasn’t sure how it would go. I spoke with a travel consultant from Travel Happy, and she did the research regarding where to stay as well as suggestions of places to visit in Boston, Philadelphia, and Washington, D.C.  I had never used a travel consultant before, so this was a new experience; I would definitely do it again! She made reservations at the hotels we would stay at, and all of them were in close proximity to walk or to use public transportation or Uber.

As I mentioned in previous blogs, my husband Randy is a history buff so this Revolutionary Civil War Tour was an attempt to have our grandsons experience history and to gain a better understanding about our country. They are still young - Jace just turned 12 and Jayden will be 10 later this summer - so we didn’t know what they had already learned in school since we live in different states. Now that the historical portion of the tour is over, I can say that I am pleased that Jace and Jayden have truly experienced history. I don’t expect that they will remember all the details of what they learned, but through all the “field trips” we took, they are better able to communicate big ideas. They understand the sacrifice it took to fight the British and to form a new nation. They understand that our founding fathers had to come to a common understanding about the ideas that our country would be founded on. They walked the battlefields of Gettysburg and realized that America came very close to becoming two nations instead of one. They understand the important role that Congress plays in making laws that impact all of the people of our country. When I asked Jace and Jayden separately about who they felt was the greatest leader they learned about on this RCW Tour, they each immediately answered, “Abraham Lincoln” because he freed the slaves and was successful in keeping our country together.

I think I was most proud of how attentive Jace and Jayden were throughout the tours even though there were many days when we were out all day. Never once did they say they were bored, and they answered respectfully when adults asked them questions. Of course, there was the time the park ranger asked Jayden what his favorite part of school was, and his response was “Recess!” I am sure he was just being honest. On the last day when we were out all day touring several national memorials, a lady took the time to go up to Jace and Jayden at the end of the tour to compliment them on their respectful and attentive behavior.

We are now in Orlando; since we were already on the East Coast, how could we not stop here to enjoy some fun? I believe that Jace and Jayden earned this “reward” to relax after experiencing history for eleven days. I also learned so much and gained new understandings about the events and people that are so crucial to the understanding of what makes our country great. Hopefully, we will all have more opportunities to experience history in the future. 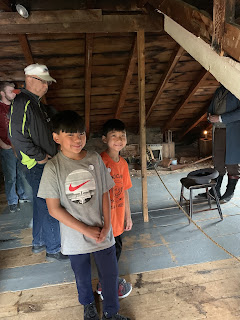 Jace and Jayden learned how a civilian family was impacted when 90,000 Union soldiers and 70,000 Confederate soldiers overran the town of Gettysburg with a population of 2,400 people. 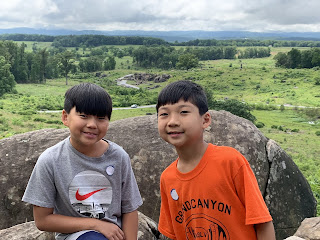 They got to walk the battlefields of Gettysburg and learned how the Union Army took advantage of their position on Little Round Top to win the decisive battle that ultimately determined the outcome of the Civil War. 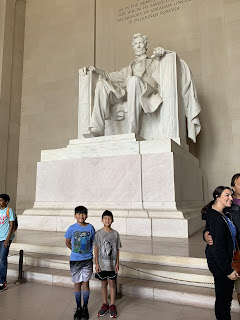 Jace and Jayden stand by the statue of who they consider to be the greatest President of our country.

Jan Iwase
I was an educator for 45 years until I retired in 2018. At that time, I began writing a book which was published in 2019 titled, "Leading with Aloha: From the Pineapple Fields to the Principal's Office." Please visit my web page at janiwase.com.