What an Experience so Far!

Well, my intention to have Jace and Jayden keep a travel journal went down the drain. I think I was treating this like an educational opportunity, getting them to practice thinking and writing skills. However, I didn’t want to nag them, and we were doing a lot of reflecting after each of our trips. We have been to Boston, Philadelphia, and half of our Washington D.C. travels so far. Tonight we discussed their reflections. Here are some of their thoughts:


Learning about those who fought to form our country has been an eye-opening experience for Jace and Jayden. They are learning about history, government, and famous people like George Washington, John Adams, Benjamin Franklin, and John F. Kennedy who have helped America become a better place for everyone including them and all of their friends and family. Tomorrow, the boys will learn about Abraham Lincoln who was the President who ended slavery and kept our country together. They are excited; Abraham Lincoln is one of their heroes, and they read books about him. 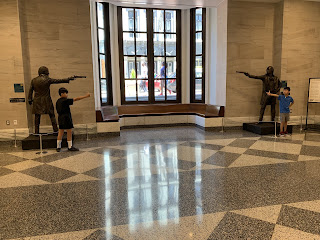 Jace as Aaron Burr and Jayden as Alexander Hamilton are dueling at the Museum of the American Revolution in Philadelphia. 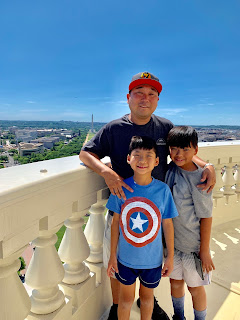 We made it to the top of the Capitol Dome! Can you see the Washington Monument in the distance? It’s so tiny!

Jan Iwase
I was an educator for 45 years until I retired in 2018. At that time, I began writing a book which was published in 2019 titled, "Leading with Aloha: From the Pineapple Fields to the Principal's Office." Please visit my web page at janiwase.com.